Wishing you Peace, Freedom, & Joy this Holiday Season and Throughout 2022

Borut Pahor - (President of the Republic of Slovenia) »

 After Freedom: The Roads to Flourishing Edmund Phelp - (Laureate of 2006 Nobel Memorial Prize in Economic Sciences) »

"History Did Not End, But Freedom Will Prevail Every Time" Roza Otunbayeva - (Former President of Kyrgyzstan) »

"Freedom of Movement and Brain Drain in the EU- Addressing the Challenge at all Levels" Emil Boc - (Mayor of Cluj-Napoca, Romania; Former Prime Minister of Romania) »

The Growing Importance of Cities and their Role in defending Western Democracy Jan Vapaavuori - (Mayor of Helsinki, Finland) »

 Fall of Walls and Raise of Human Rights from Berlin to Pristina Mytaher Haskuka - (Mayor of Prizren, Kosovo) »

''The Wall: from a City Divided to Europe United'' Vojko Obersnel - (Mayor of Rijeka, Croatia) »

 Del otro lado, from the other side, the US-Mexico Wall  Vanessa Rubio Marquez - (Senator of the Mexican Congress) »

"The Freedom after Freedom" Sanita Osipova - (Vice President, the Constitutional Court of Latvia) »

If you Want Peace, prepare Justice - Confidence in the Judiciary, an Essential Value of the Rule of Law Augustin LAZAR - (Former Prosecutor General of Romania) »

 Reflections on the Economic Recovery Miracle: Eastern Europe after the Fall of the Berlin Wall  Marek Belka - (Former Prime Minister of Poland) »

Moses Cheboi - (Deputy Speaker of the National Assembly of Kenya) »

Changes after Socialism in the Comparative Perspective Leszek Balcerowicz - (Former President of The National Bank of Poland; Former Deputy Prim Minister of Poland) »

30 years after the fall of the Berlin wall, what prospects for our strategy and architecture of security in Europe ? Joëlle Garriaud-Maylam - (Member of the French Senate) »

Something is There, that doesn't Love a Wall Lena Nazaryan - (Vice President of National Assembly of Armenia) »

"The Military, an Agent of Cultural Diplomacy" James B. Peake - (US Army General; Former US Secretary of Veterans Affairs) » 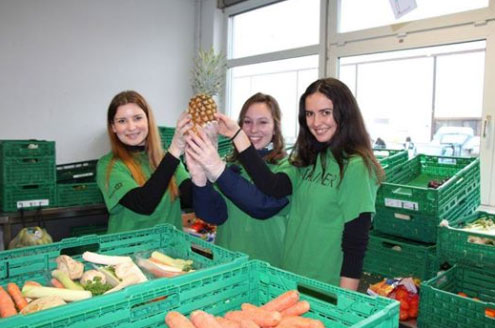 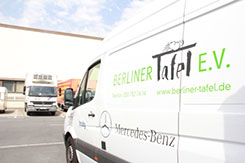 The ICD Academy for Cultural Diplomacy encourages all of its students & interns to get involved in projects outside of their main responsibilities, and volunteering is a key part of this initiative. The ICD has established strong links with a local-based charity called The Berliner Tafel, and it has become a tradition now for interns to get involved with their various projects and give something back to the local communities here in Berlin.

Who are the Berliner Tafel? 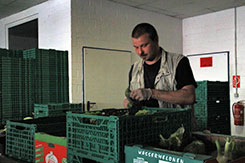 The Berliner Tafel was founded by Sabine Werth in 1993 and was unique in its kind. Twenty years on there are now 900 establishments nationwide and many sister companies have been set up along the way, including children’s restaurant TALMArant, the KIMBAmobil and KIMBAexpress. Every month over 660 tons of leftover supermarket food is distributed to approximately 125,000 people after the Berliner Tafel vans collect the good food from the sorting hall and visit the 300 associations across the city, who then see that the food is passed on to the vulnerable members of society. During the week, between 5 and 10 volunteers work during the day in the sorting hall- separating spoiled food from food that can be salvaged and passed on to the affiliated associations, and numbers increase over the weekend to between 20 and 30. Nevertheless, the Berliner Tafel are always looking for more volunteers and the ICD endeavours to contribute with a willing team of interns each week to work the four hour Saturday morning shift.

Our experience at the Berliner Tafel.

For all four of us who had opted to volunteer at the Berliner Tafel it was the first time we had ever got involved with an initiative of this kind and we were all apprehensive on our early morning arrival. However, after reaching the industrial park, where the sorting hall for the Berliner Tafel is situated, and being greeted by the Volunteers Manager, Holger Dietze, we were keen and ready to dive straight into the action. Holger explained briefly what our main duties would be throughout the morning and gave each of us an apron and a pair of polythene gloves before proceeding to show us around the sorting hall. 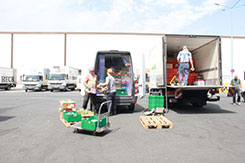 Other volunteers were already hard at work and the radio was blasting out cheesy, upbeat tunes which reflected the atmosphere in the sorting hall. He introduced us to the team of drivers who take the vans to the supermarkets and come back with crates full of leftover fruit and vegetables- which are then brought into the sorting hall, then he took us to the work surfaces where we would be selecting the crates from the supermarket and sorting through them. Huge bins were placed around the hall for the waste produce to be made into compost and all plastic packaging was separated into bags so that it could then be recycled. Holger told us that once we had gone through the crates we were then to categorize all the good fruit and vegetables into individual crates which were to be taken to another group of volunteers who double checked the produce and arranged for it to be loaded back onto vans for later distribution. 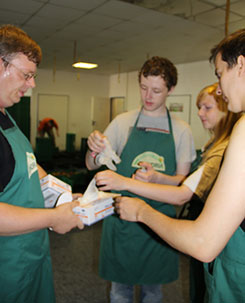 Whilst the work was quite demanding due to the smell from the spoiled fruit and vegetables, everyone was in good spirits and we were allowed a 5 minute break every hour whilst there was a constant supply of refreshments and even an ice cream break half way through the shift. We got to speak to people of all ages and occupations and we soon realised that for the regular volunteers, the Berliner Tafel was an escape for them, where they could come and socialise with friends at the same time as doing a good deed for the underprivileged in their community. 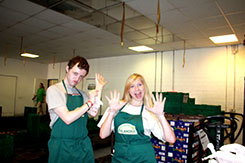 On the day that we volunteered, everyone enjoyed a BBQ that some of the volunteers had organised for after the morning shift, and we sat out in the sun and got chatting to everyone to hear why they had decided to get involved in the project. One lady told us that she had always been an active member of the community, giving back whenever she could, but since retiring she had been looking for something to really keep her busy, and when a friend told her about the set-up they had here at the Berliner Tafel she thought it sounded perfect. She volunteers between two and three times a week and has established a good group of friends who also volunteer regularly.

“Whilst I look forward to coming each week to catch up with my friends and to feel like I’m doing something productive with my time, the real reason I’m here is because I truly believe in what the Berliner Tafel is doing and I am proud to be part of an organisation that is really helping those in Berlin who are in need.” 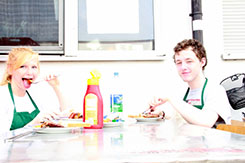 After the BBQ we said our goodbyes and thanked everyone for letting us be part of this mini community. Not used to getting up so early on a Saturday, we were all exhausted but felt good about the work we had done that morning and that we had made a contribution to this excellent cause. It was great to be able to do something completely different to the responsibilities involved with our internship and we all agreed that we would come back to volunteer again. We have a lot of respect for those who volunteer every day and we want to encourage others to get involved in the Berliner Tafel too, it’s surprising the amount of difference such a small contribution can make! 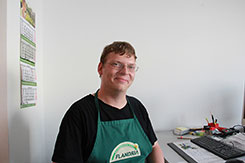 Holger Dietze, aged 33 and originally from Greifswald, is a dedicated member of the Berliner Tafel who spends 40+ hours a week motivating his team of volunteers and managing the food sorting process so that good food which might otherwise go to waste can be salvaged and distributed to the underprivileged of Berlin. As the organisation is not for profit and does not receive any government funding, Holger only receives 200 a month for his contribution and relies on the state for financial support, however, Holger has a personal connection to the Berliner Tafel and is committed to his work:

“The Berliner Tafel was there for me when I was in need, and I always told myself that whenever I got the opportunity to give back to the community it would be with them. I began volunteering with the Berliner Tafel in December 2012, and was appointed to ‘Volunteer Manager’ last June. Although the work is gruelling and I often give up my Saturdays to volunteer alongside the weekend teams, I’m extremely passionate about the cause and I enjoy getting to meet lots of different people from different walks of life. There’s the social aspect of the project too; the team of volunteers will often eat and share stories together in the large staff kitchen on site after an exhausting shift which is always really rewarding after lots of hard work. It’s a really great atmosphere at the Berliner Tafel, everyone is always enthusiastic and I make it my personal goal to keep everyone smiling!” 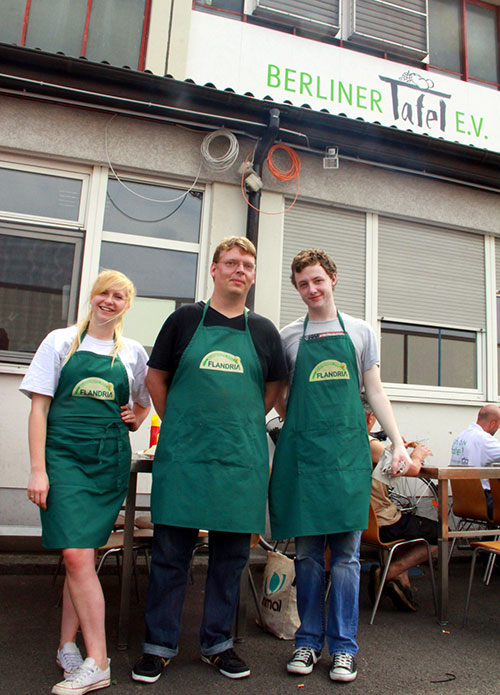